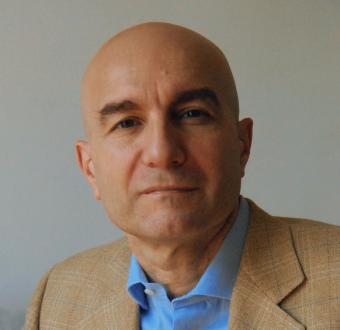 Massimo Vergassola holds a joint position as Professor at the Ecole Normale Supérieure in Paris and CNRS Directeur de Recherche. He is also leading the ENS-PSL Center for Quantitative Biology, affiliated to the PariSanté Campus Val-de-Grâce initiative that was announced by the French government in December 2020. The initiative federates the Inserm, the University PSL, Inria, Agence du Numérique en Santé and the Health Data Hub to create a new Campus on life sciences that will be hosted on the site of the previous Hôpital des armées du Val-de-Grâce. After education in Italy and France, and his postdoc at Princeton University, Vergassola received a tenured research position at the French CNRS for work on the statistical physics of fluids. His reorientation toward life sciences was made possible thanks to a mise à disposition from the CNRS to the Rockefeller University in 2001-2003. Back to France, he joined the Pasteur Institute as the head of the Physics of Biological Systems group. His CNRS position was also held with a joint appointment as professor at the Ecole Polytechnique. In 2013-19, Vergassola was Professor at the University of California San Diego and founding member of the Qbio initiative at the UCSD campus. Vergassola was visiting scientist at the Rockefeller University, KITP, IAS, LANL and IHES, he was plenary speaker at Statphys25, and he served in the board/leadership of a variety of professional journals and associations. He was Chair of the Biological Physics Division of the American Physical Society and thus in charge of the organization of the APS March meeting 2019 (all sessions on biological physics). Vergassola’s awards include the Grand Prix EADS from the French Academy of Sciences, the Fellowship and the Outstanding Referee awards from the American Physical Society, the CNRS Bronze Medal, the Biomedical prize Thérèse Lebrasseur from the Fondation de France, the Accademia dei Lincei student award, and grant awards from the Simons Foundation and the Fondation Recherche Médicale. Vergassola’s research was/is supported by major funding agencies in France and the USA, such ANR, NIH, NSF, Simons Foundation, Fondation de la recherche Médicale, Fondation de France. His scientific interests broadly cover the physics of living systems, with particular interest paid recently to the physics of embryonic development and animal behavior.

Physics of living systems (see below)

The first two publications were chosen as representative of the first part of my career, before my reorientation toward the physics of living systems. They illustrate my contributions to the Lattice Boltzmann Equation, turbulent transport, and Lagrangian dynamics (of particles transported by a turbulent flow). Other publications are a selection of my work on living systems, which is motivated by a combination of visibility, originality, and recency. My activity on biological navigation (an invited review on this subject has just appeared in the Annual Reviews of Condensed Matter Physics) is illustrated by: olfactory searches (3-4), which is still ongoing with a focus on mechanisms of odors’ perception (8) and animals’ tracking of odor trails (10); glider soaring flight (6), which allows unpowered gliders to stay aloft for several tens of minutes; bacterial chemotaxis (9) and physiology (5), which are both biologically important and popular for their relative simplicity. Finally, I am particularly attached to the work (7) on embryonic development, which I find exemplary of what physics can bring to biology and vice versa. An invited review on this subject has appeared recently in the Annual Reviews of Biophysics.